What’s the deal with the Pegasus (flying red horses) all over Dallas?  So many things named Pegasus like newspapers and school or how about the statues randomly all over?  –  Questioned by AH

I assume this means both the big one below in downtown  this newspapers, this school and the statues like the one below

The reason for all the Pegasus stuff around the city lies in its symbolism of civic pride for Dallas.  Dallasites, true dallasites, see the Pegasus and it stirs a certain sense of pride in our City.  You might ask why a flying red horse is a symbol of pride for Dallas, well the answer is relatively simple but it takes some backing up to do.

How far back, let’s see, maybe Downton Abby-estic English country estates, no wait gotta go further, colonial palaces, or medieval castles, maybe Roman Temples, or Egyptian pyramids.  See what all these buildings have in common is that they are a monument of national, local, civic, or regional pride.  For years groups of people that have formed civilized societies have built monuments to their societies.  They are sources of pride for their engineering, their beauty, their statements on wealth, and ultimately their history.

Mobile kept the Pegasus as it’s symbol for a number of years.

Now in the early 1900’s, the Magnolia Oil Company had executives and shareholders that were very proud of their growing city known as Dallas.  So when they built their headquarters in Dallas they wanted to build a monument to the City, and they did.  A four hundred foot tall beautiful building built in downtown designed by Sir Alfred Bossom (also the inventor a device for protecting people from suffocating if they accidentally got locked in a bank vault…awesomesauce).  The building known as the Magnolia Building was not only the tallest building in Dallas at the time, but the tallest in Texas. 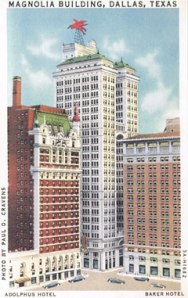 But back to the Pegasus, Magnolia placed the Pegasus up atop their very tall building in the 1940’s.  Again they were proud of Dallas and themselves, they wanted people to know about it.  So their symbol was all lit up in neon lights for the world to see.  It was actually two Pegasus’s back to back so it could rotate atop their building.  Or if you believe some, they put two Pegasus’s up there to show that Dallas wasn’t a one-horse town…get it.  So this big neon rotating red Pegasus atop one of the tallest building in Dallas was the first thing you saw driving into to Dallas, or flying in on a DC-9 at night. 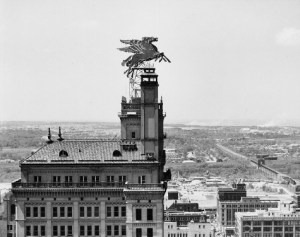 My great aunt would tell stories of returning from camping in the hill country and knowing that when she saw that bright shiny flyin’ horse, she was close to home.  For people back in the 40’s, 50’s and 60’s, when they saw a neon red Pegasus it meant Dallas, and not just Dallas, but people from throughout Texas and the nation.  The Pegasus would eventually come down in the 90’s after Magnolia, with Exxon moving out of that buildin. New taller, shinier buildings where built that dwarfed the old Magnolia building, it supposedly lost much of its glamour.

So why are fairly new schools, newspapers and major infrastructure construction projects named Pegasus.   Well that has to do partly with the second life of the Pegasus in Dallas.  In the 70’s and 80’s Dallas did several things that negatively affected the Pegasus.  First it built a lot of  tall shiny buildings, second it told people living in downtown apartments to leave and make way for the tall shiny office buildings.  That meant that by the 90’s there were few people living in downtown, and though there were a lot of tall shiny buildings not all of them were full.  Baby boomers that flocked to the suburbs were now in charge of companies and moved them to office park in far flung exburbs.  So the City was left with a challenge of revitalizing its downtown, a situation many cities at the time were faced with.  It was at this point that Dallas seized upon the Pegasus as a symbol for the revitalization of downtown.  It was once a symbol of the engineering might, of the wealth and the technological achievements of the city.  Now it was going to represent the history and beauty of the City, an image of a by-gone past, a romantic version of a city’s downtown with theater row, nightlife and vibrancy. 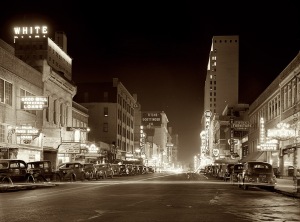 The Magnolia Building, long neglected but still beautiful, was renovated and turned into a luxury hotel and apartments building.  A new Pegasus was commissioned for the top of the building that matched the old one.  As a part of the effort, a number of smaller Pegasus statues were built, painted uniquely and auctioned off, like the one below. 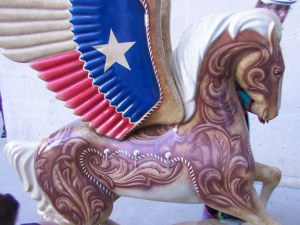 They can be found throughout the City, here or there, in parks, office buildings, schools, private residency, wherever.  To younger generations the gen-xer’s and Millennials that grew up in Dallas throughout the 70’s, 80’s and 90’s it means a vibrant city, a symbol that speaks to the notion that “I’m proud of the cultural and historical depth of Dallas.”  Or like below, used as part of iconic art work in Deep Elbum.